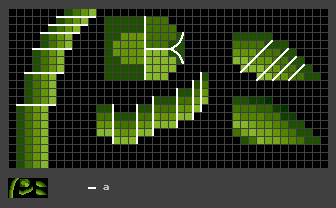 a) lines perceived between pixels (white)

Banding in pixel art refers to a special case of aliasing where perception creates an illusion of lines between pixels caused by the arrangement of values around that perceived line artifact.

This is usually an unwanted effect, often found in gradients but might be used specifically to fake lines in tight spaces where the resolution does not provide enough space to explicitly draw any pixels to display an actual line.

Lessening the effect in unwanted cases can be attempted by changing clusters and by applying regular anti-aliasing strategies.

Banding is not to be confused with Colour Banding which refers to the distinctly visible changes between stripes of colors hugging each other in what was supposed to look like a soft gradient.