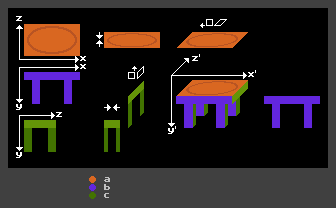 Cabinet Projection is a parallel projection traditionally used in the furniture industry.

One side or face of the depicted object is drawn parallel to the picture plane and the third dimension is projected at an angle and all distances along it are foreshortened.

Cuboid objects or objects which can be constructed as combinations of cuboids are relatively easily transformed into a cabinet projection in pixel art.

With top, front and side views of the object given, the cabinet projection is created by taking the front view as is, top and side views are then halved and sheared, each along one of the picture planes axes.