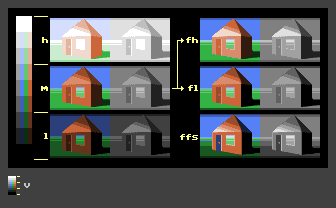 Value(as lightness, also referred to as tone) refers to the brightness of a color in relation to how white would appear under similar lighting conditions.

Key describes where the majority of values in an image are located on the value scale.

In an image in medium key, forcing the heights up and forcing the lows down, frees the values between heights and mediums and between mediums and lows for use in anti-aliasing.

The anti-aliasing qualities of values are mostly independent of hue. Colors of similar value and saturation can be used for anti-aliasing between higher and lower values, regardless of the hue of the colors around the aliasing.