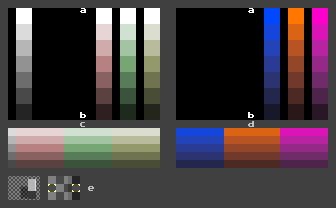 a) high value b) low value
c) value as lightness
d) value in HSV model
e) brightness is always perceptual and disconnected from the well defined meaning of value in either sense: the rectangles marked in yellow are the exact same value but the one in shadow is perceived as less bright

Value in the sense of lightness refers to the brightness of a color in relation to how white(on a gray scale) would appear under similar lighting conditions. Lightness is an absolute property, testable against the definition of “white” in an image.

Brightness is a relative property and depends on context(the surroundings of the observed part of an image). Something can be perceived equally bright as something else or darker or brighter, despite being of the same absolute lightness(=value in that sense).

There are different meanings of value and lightness between different models which is a common source for confusion: In the HSV color model, value has a different meaning: there a low value is near black and the highest value is a fully saturated color (but not in the sense of “saturation” as it is used in the model but in a common sense understanding of the word while saturation in the model refers to the scale between achromatic(gray) and chromatic(colorful)).

HSV is sometimes called HSB where brightness then is no longer a relative property but synonymous with the meaning of value as being between black and colorful.

Lightness in HSL is not “value as lightness” as described above but a property on a scale between full black and full white in the sense of their minimum and maximum digital representation(RGB 0,0,0 and RGB 1.0,1.0,1.0).