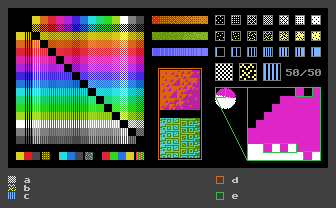 Two or more colors are placed close to each other, the original intention being to create the illusion of an extra color which would otherwise not be available due to restrictions.

Another intent for dithering can be to create a sense of texture. Texture can be an unwanted side effect on modern screens if the contrast between the mixed colors is too high, so that the pixels are clearly visible instead of blending into each other as on blurry screens.

Dithering may also employ stylized regular or irregular patterns which is related to shape bluffing and texturing more than to mixing colors.

Dither-AA refers to an attempt to antialias by using proximity-mixed(dithered) colors.